Mental Health Positivity In Your Workplace 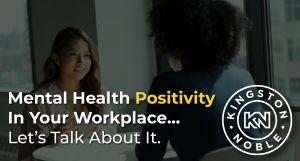 How to discuss emotions with your colleagues (without awkward silences)

Let’s talk about awkward balloons. They’re hugely colourful balloons that rise to the top of rooms during awkward conversations. You hope that they’ll create a convenient distraction that changes the subject – but then disaster strikes. You remember that they’re imaginary, they pop, and you’re left in the same awkward situation.

They tend to start floating around as soon as mental health gets mentioned in the office. Meanwhile, 17.9 million working days were lost in 2019/20 because of stress, depression or anxiety. 828,000 people were forced to take time off work because of these awful conditions. Those statistics are just for the UK.

So, in summary…loads of us are ill with stress but we feel too awkward to talk to our colleagues about it. Meanwhile, businesses are losing money and we’re all losing crucial time with our families because…again…. nearly a million of us are so ill with stress that we can’t work.

Can we just talk it out?

It’s not that people don’t care about their colleagues. They just worry about being judged or causing offence when discussing their feelings. Worst of all, nobody wants everything they’re saying to be spread around the office just in time for the morning team meeting.

Imagine if you could talk about your feelings with your colleagues without wanting to discreetly step into the nearest time machine. What if you could replace awkwardness with positive (and stress-free) experiences? Here we’ll give you some tips on how to do exactly that.

Anyone else still judging books by their covers?

We were all told not to do this when we were growing up. But we all still do. Everyone forms an opinion about someone as soon as they meet them. First impressions can determine how we see people for years after they first turn up in our lives. Sadly, jumping conclusions in this way means that we all sometimes write people off before we get to know them properly – which is hugely unfair.

When you can get back to the office, try to see the good in everyone you meet. Some people become incredibly nervous when meeting new colleagues (especially if it’s their first day in a new role). They’re probably wonderful people who just take a bit of getting to know. If you take the time to get to know them, you’ll probably discover a talented colleague and an amazing friend in equal measure.

Try to separate people from politics

As you’re probably aware, the UK had a referendum a few years ago that caused a bit of controversy. A few months later, our American friends elected a President who was also no stranger to a bit of drama. Unless you’ve spent the last few years quarantining under a particularly comfy rock (a good idea tbf), you’ve probably ended up discussing one or both of these topics at work.

When you’re talking about politics with your colleagues, it’s important to accept disagreements. You might have completely different views on the EU, austerity, and the latest Budget, but still, be great friends.

It’s crucial that you contribute to an office culture that tolerates differences of opinion. If not, some of your colleagues might feel that they can’t be themselves around you. That will then have an impact on everything from collaborations with them on work projects, to how long they stay with the company. Is it really worth losing a rising star from your accounts team because they feel like life outside the EU might not end in oblivion?

Teams that can disagree on politics but still go for a drink afterwards are teams that stay together.

Listen instead of just hearing

When people talk, do you listen or just hear? Listening involves paying close attention to what someone’s saying and showing that you understand where they’re coming from. Hearing is just waiting for them to stop talking before launching into a reply that takes no account of anything they just said. Sometimes people just want to talk about what’s on their mind. They don’t want to hear lots of solutions to their problems.

They just want to know that they’re not alone. Going through a difficult time on your own is so much harder than going on the same journey with a friend. Taking the time to listen to your colleagues will do wonders for everyone’s mental health. Just being there for someone is often the kindest and most helpful thing that you can do for them.

When we all get back to the office, let’s make those awkward silences a thing of the past. Lockdown has been tough for everyone. By accepting differences and showing mutual understanding, we can all improve our mental health together.

If you need any help looking after your team’s mental health, please drop us a line.